Have you ever wondered about what is the language of Armenia, what language do Armenians speak? Well you just found the right article! But before diving into, let me tell you, that if you have decided to visit Armenia, you shouldn’t worry about the spoken language as Armenians speak Russian and English as well. So if you speak any of the mentioned languages you won’t face any issues. 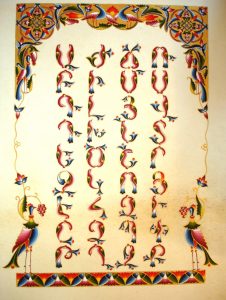 The Armenian language is an Indo-European language. Today, it is the official language of Armenia. Armenian was spoken throughout the Armenian Highlands. Now is widely spoken throughout the Armenian diaspora. Armenian language is one of the most powerful, unique and amazing languages of the world. It is no accident that Lord Byron (George Gordon Byron) a famous English poet, peer, and politician found Armenian language wonderful. Byron wrote. “Armenian is the language to speak with God. He spoke to the world in Armenian.” The fact that George Byron learned and wrote poetry in Armenian and translated ancient Armenian papers is amazing. Though Armenia was the first country to adopt Christianity as a state religion the majority of the population couldn’t read the Bible as there weren’t Armenian letters and the Bible was either in Greek or in Assyrian.

The Creation of Armenian Alphabet

The Armenian Alphabet was created in 405 and the creator was Mesrop Mashtots (also spelled as Mesrob Mashtots or Mesrop Mashtoc). Mashtots was the man who took the responsibility of creating the Armenian script on his shoulders. He was an early medieval linguist, theologian, and composer. He had a really good education and was fluent in Greek, Persian, Asorian and Georgian. Before inventing alphabet he would read the Bible and orally translate it into Armenian.

After creation of alphabet he had a mission to translate all the religious materials (books and papers) into Armenian, to preserve the Armenian ethnicity. Armenians desired to have the translated version of Holly Bible, so Mesrop Mashtots started the translation of Bible. Soon after inventing the alphabet, he established schools throughout Armenia where the language was taught. The Armenian alphabet starts with the letter Ա-(A), that is the first letter in the word Astvats (God in English). The last letter of alphabet is Ք (Q), that is the first letter of Qristos (Christ in English). Actually he invented 36 scripts (from ‘Ա’ to ‘Ք’) but then three more scripts were added during the Middle Ages (Եվ, Օ, Ֆ), bringing the number of letters in the present-day Armenian alphabet to 39.

The first sentence that was written in Armenian was “To know the wisdom and instruction, to understand the words of insight” (ճանաչել զիմաստութիւն եւ զխրատ, իմանալ զբանս հանճարոյ…). Mashtots is an Armenian national hero and educator. He is also known as “Mesrob The Vartabed” or “Mesrop The Vardapet” ( the word “vardapet” means an educator). Throughout all these years his great work is still alive and will continue to be an inseparable part of the Armenian identity and culture.

Historical sights related to the alphabet

The first one is Matenadaran – a museum of ancient manuscripts that is officially the Mesrop Mashtots Institute of Ancient Manuscripts; it is the world’s largest repository of Armenian manuscripts. It is located in capital city Yerevan. A monument to Mesrop Mashtots was built in front of the building, and an inscription was carved next to the wall: “To know wisdom and instruction, to understand the sayings of the mind”. As already mentioned this was the first phrase written in Armenian letters.Though the rough periods in the history of Armenians, the Armenian Apostolic Church managed to save over thirty thousand Armenian manuscripts created during the 5th-18th centuries, many of which are stored in Matenadaran and on the island of St. Lazarus in Venice today.

When it was established as a distinct institution in 1959, it had around 10,000 Armenian manuscripts and 4,000 fragments. Back then there were some one thousand manuscripts in other languages, such as Persian, Syriac, Arabic, Greek, Georgian, Russian, Hebrew, Hindi, Tamil, Latin, and other languages.

The second one is the Alphabet Monument that is situated in the Aragatsotn Province near the village Artashavan. There you can see the 39 stone letters of the Armenian alphabet from ‘Ա’ to ‘Ֆ’. Actually, it was given a gift of 39 giant, carved Armenian letters, strategically placed near the final resting place of the creator of alphabet. The complex also includes other monuments dedicated to the great Armenian thinkers. All the statues and letters are made of Armenian stone called ‘tufa’.

People say that Armenian sounds are hard to pronounce and the language is hard to learn. If you are inspired to learn Armenian language know that it’s hard but worth it! Besides, you are always welcome to ask for some advice to any Armenian. Locals will just be pleased to help you, indeed, teaching Armenian language is a great pleasure for every Armenian.